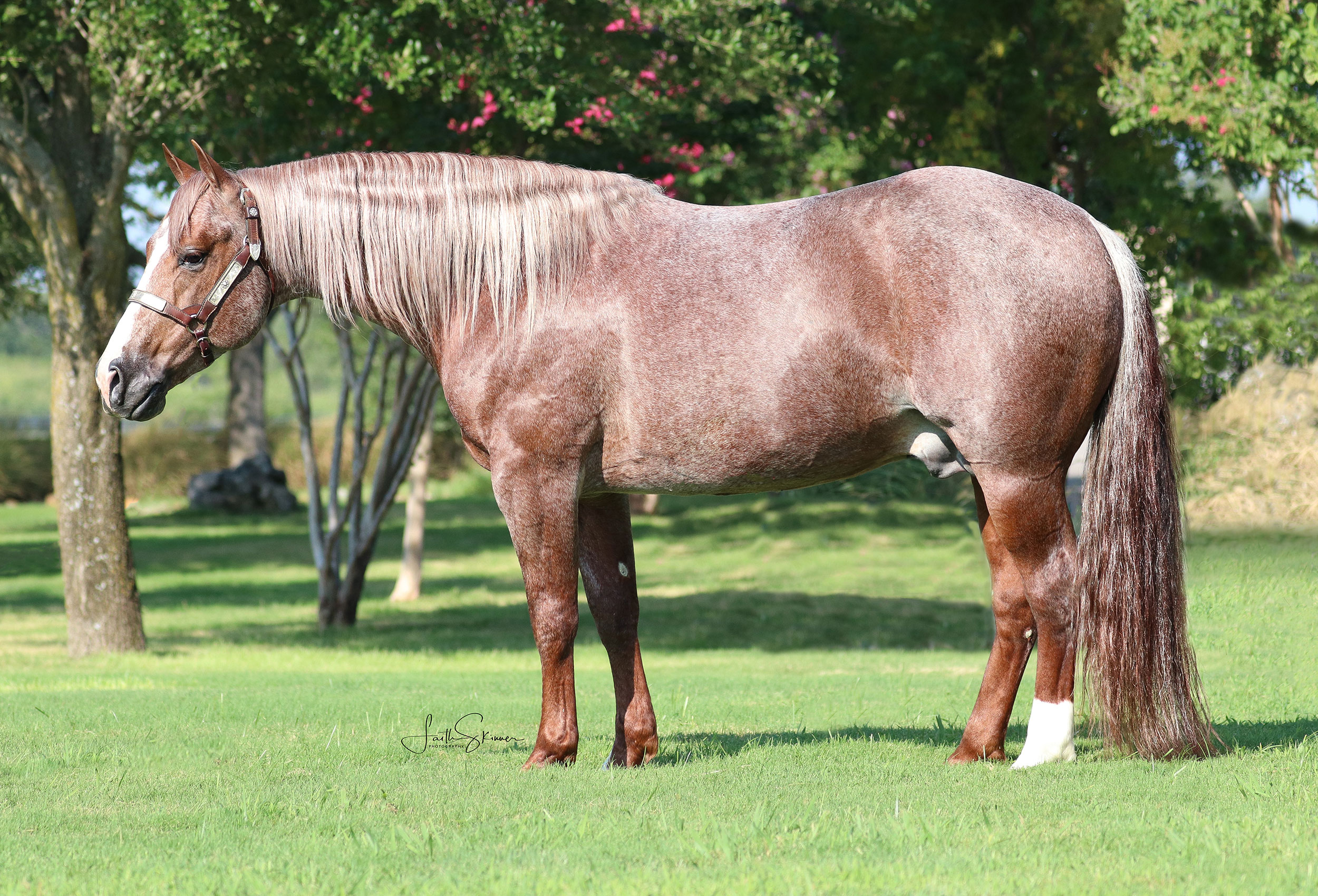 Metallic Rebel entered this year as the leading freshman Western performance sire thanks to the efforts of his first foal crop. Four months into the year, his first bunch of youngsters made their father an EquiStat Elite $1 Million Sire.

The red roan stallion owned by Thomas and Lisa Guinn, of Philadelphia, Mississippi, put an exclamation point on the title when two sons from his freshman crop – stallions Reybels Cause and Third Edge – each marked a huge 229 to share the Open Championship at the NCHA Super Stakes.

Bred by Fults Ranch Ltd, of Amarillo, Texas, Metallic Rebel is out of EquiStat Elite $2 Million Dam Sweet Abra (by Abrakadabracre). He was bought by the Guinns prior to beginning his competition career, after catching Thomas Guinn’s eye in the practice pen – a story that is part of an upcoming feature on Metallic Rebel in Horse of The West.

Metallic Rebel was extremely successful as a show horse, entering the breeding shed after winning more than $437,965 during his show years. While in the cutting pen, he was the 2017 National Cutting Horse Association (NCHA) Open Horse of the Year and earned membership into the NCHA Horse Hall of Fame.

He got off to a strong start in the breeding shed with 162 registered American Quarter Horse Association (AQHA) born in 2018. They reached futurity-age last year, and midway through their derby year have earned a collective $1,071,545 recorded in the EquiStat database as of April 29.

That puts Metallic Rebel at $1 million about a month faster than his sire, Metallic Cat, whose first crop earned him the distinction in June of their 4-year-old year after the Pacific Coast Cutting Horse Association (PCCHA) Derby show.

Metallic Rebel reached the all-important benchmark mostly through his progeny’s cutting earnings, which comprised $971,579 of his total offspring earnings in EquiStat as of April 29. However, his sons and daughters also earned more than $99,000 in reined cow horse earnings so far.

The leading earners sired by Metallic Rebel, according to EquiStat:

As excited as Metallic Rebel‘s connections are for his progeny’s success in cutting and reined cow horse, they’re also pleased to see his offspring have the diversity to succeed in other disciplines. While the stallion’s emphasize in the breeding shed will remain on cutting, he’s already sired some winning rope horses in his first crop, including Firstt Rebel, who won the Roping Futurities of America High Stakes Heading in February.

With the many incentives up for grabs in disciplines of barrel racing and roping, Roberts said being able to sire offspring with the ability to compete in the wider performance horse landscape is an opportunity for today’s stallion.

Horses from elite Western performance horse backgrounds are competing in other disciplines and, in some cases, are being specifically sought out by breeders. Some Western performance horse breeders also have reached across disciplines more in the past few years – an example being the handful of finalists at the 2021 National Reining Horse Association (NRHA) Futurity that were sired by cutting stallions or out of mares by cutting sires.

“The opportunity for performance horse sires now is is bigger, better and greater than ever before,” Roberts said.