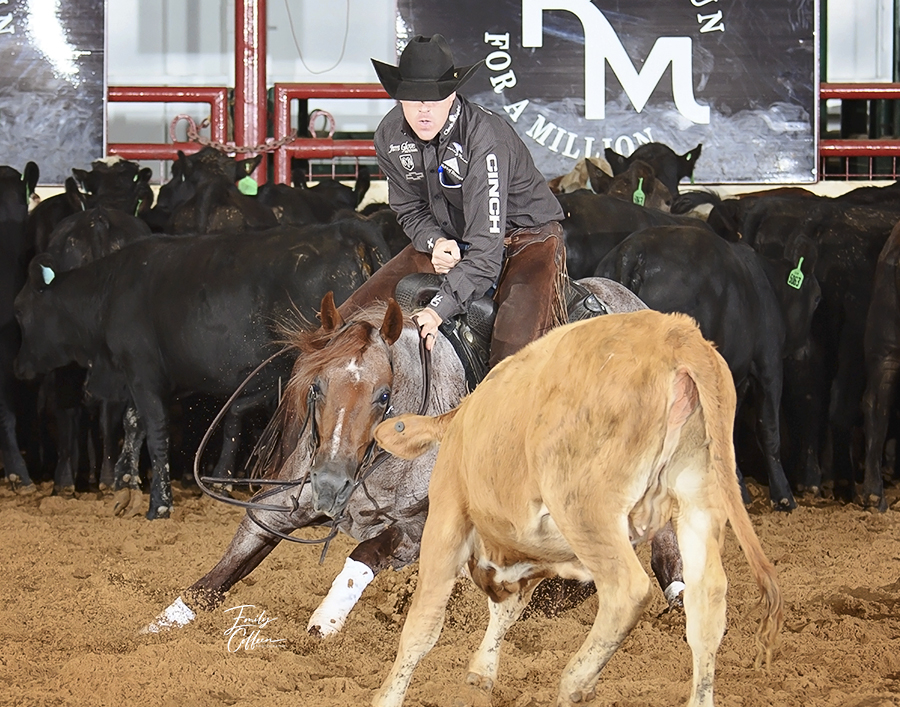 All eyes peer up from the draw sheet when the red roan stallion and his rider step into the pen at a cutting. The duo needs no introduction after their strong derby year, racking up more than $215,000 in winnings together. That horse is Third Edge, and his rider, EquiStat Elite $5 million earner Wesley Galyean.

The Derby Open Finals at the Brazos Bash was no different, with Third Edge topping the field for 4-year-olds with a 228, winning $29,000 for owner Teton Ridge.

“It was a tough run, all three cows were challenging. By our third cow – we chipped it with 33, 34 seconds to go – I thought to just keep the pedal down and just put as much heat on it as we could. Swing for the fences and see what happens,” Wesley explained.

“Some great horses are great for a little bit, but they can’t withstand being great,” Galyean said “I’ve never talked about this [but] I tried to encourage him, pet on him and tell him good job. I know it sounds crazy but I really think the things he’s done is out of love for me. The grit and try came from how much he loved me.”

Even at the Brazos Bash, Galyean said Third Edge was sneaking a look at him after their gritty finals run. Galyean responded with a pat well done.

“Through that love, his confidence grew. I always say it’s like boxers. Boxers are great until they start getting punched back in the mouth, and I think the love and the encouragement made him be able to take those hits [in the pen] and keep on trying for me,” Galyean said.

Third Edge is sired by Metallic Rebel and out of Lil Rattler (by Dual Rey). He was purchased by Teton Ridge in 2022 and has continued to succeed under Galyean.

“I think the best way to put it is – he’s kind of like a freak of nature,” Galyean said. “I’ve been blessed to get to be on his back and work him as a two-year-old and three-year-old, show him at the Futurity, make the finals and go throughout this whole process. I get to walk down to the herd on this horse and work this horse.”