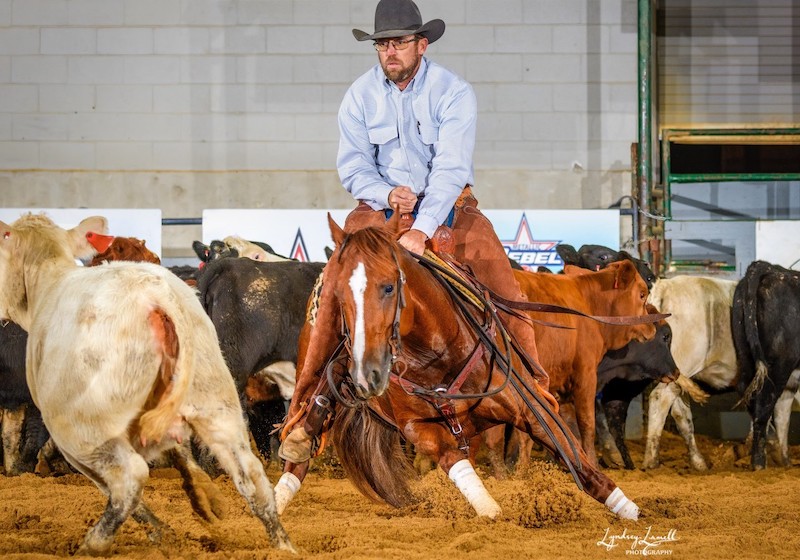 Rebellicious showed off her moves in the Southern Cutting Futurity, winning the 3-Year-Old Open with trainer James Payne at the event held in Jackson, Mississippi.

Payne, of Overbrook, Oklahoma, piloted the mare to a 223 for owner Kathleen Moore on Tuesday, Oct. 25 at the Mississippi State Fairgrounds.

The mare by Metallic Rebel had always caught the eye of her trainer, who first saw her when Chase Hermes had her in training for her previous owner, Katherine Hermes. Moore, of Madill, Oklahoma, bought the mare out of Style My Lizzy (by Lizzys Gotta Player) after last year’s Brazos Bash.

“I just like that ‘Lizzie’ bottom side and and I liked her just because she was real swoopy quick, edgy kind of type mare,” Payne recalled. “I don’t know, she just kind of caught my eye whenever whenever I saw him work her.”

At the Southern Cutting Futurity, Rebellicious showed seasoning and maturity in her run from draw one in the finals.

The trainer said the key to a successful “early” futurity horse like Rebellicious, who competed in futurities held in the late summer summer and fall instead of waiting for a debut at the NCHA Futurity in November, is to have a horse that is willing to listen early on and accept more responsibility as the show season progresses.

“The closer you get to that 4-year-old year, [the more] you kind of back off on the control and say, ‘Hey, go work the cow and you’d be responsible for it.’ I think it’s just the transformation [from] like the beginning of August [where] you’re kind of trying to make her listen, and then as the fall goes on you let her ‘cow’ more,” Payne said.

Rebellicious followed that playbook, finishing second at the West Texas Futurity in August and then accepting more responsibility in winning the Southern Cutting Futurity this week.

Going forward, the plan is for Rebellicious to continue to compete in the Open with Payne, who thinks she’ll be an Open-caliber 4-year-old for next year’s derbies.

Rebellicious also earned $7,551 in the Southern Cutting Stallion Incentive and another $5,000 from the owners of Metallic Rebel, who offered another incentive for the NCHA Open Horse of the Year’s highest-placing progeny.

Bred by Tim Drummond, of Pawhuska, Oklahoma, Rebellicious banked a total of $27,551 at the show. Her lifetime earnings now stand at more than $42,781, according to EquiStat.

Rebellicious is the only money-winner recorded in EquiStat for her dam.