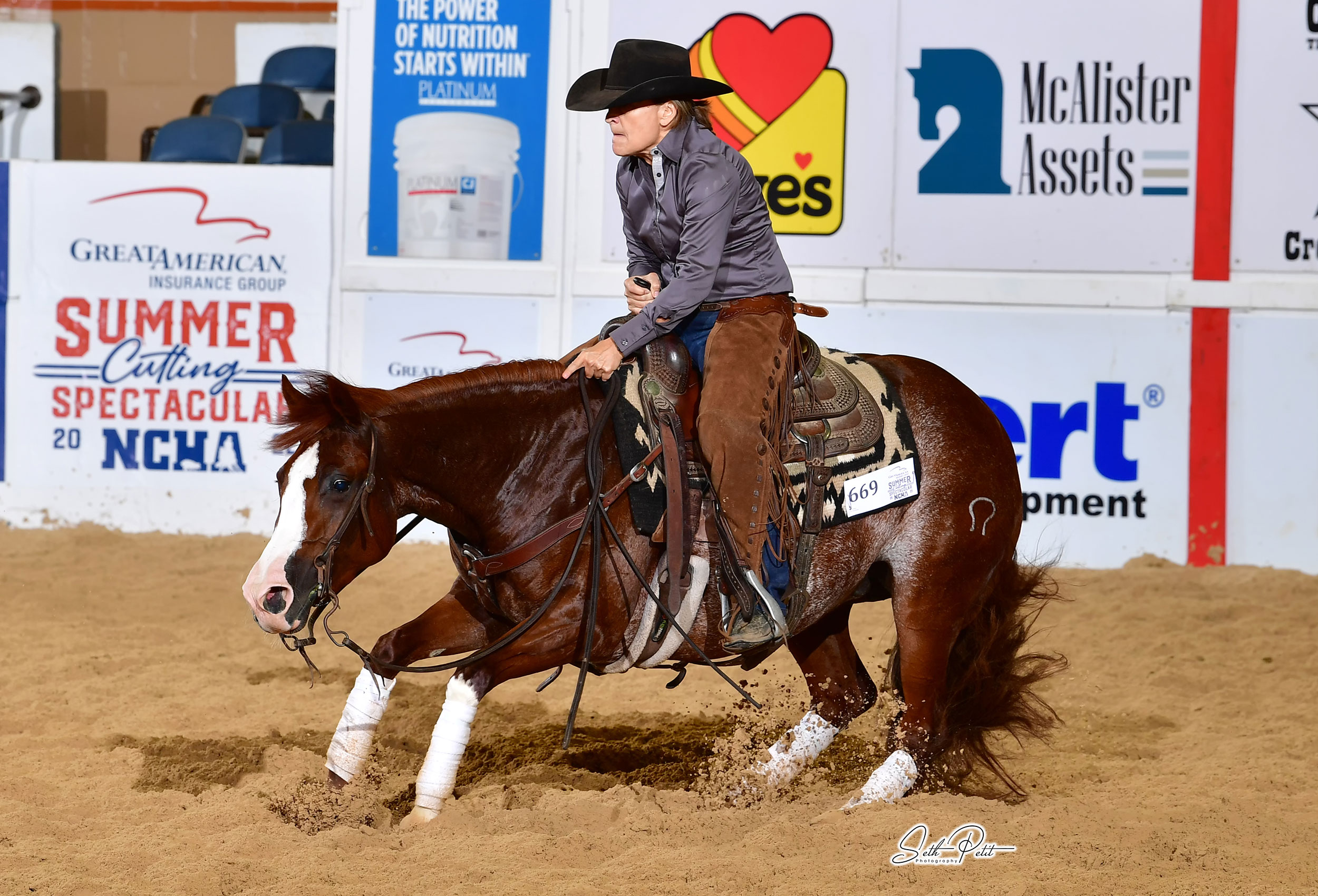 Kathleen Moore stepped into the herd in Will Rogers during the 4-Year-Old Non-Pro finals with an unusually relaxed demeanor – she was aboard a horse she wasn’t supposed to be riding.

It seemed to work.

The horse, Purdys Rebel, and rider from Madill, Oklahoma, went on to mark a 225, winning the National Cutting Horse Association (NCHA) Summer Spectacular 4-Year-Old Non-Pro on Thursday, July 28, in Fort Worth. It paid $15,425 to Moore, who owns the mare.

“I’ve had her from late in her 3-year-old year and she’s a little quirky thing. She’s finally now starting to settle in be a cow horse,” Moore said.

In training with James Payne, Purdys Rebel (Metallic Rebel x Purdy Bet x Bet On Me 498) was on the Open roster before Payne decided it would be best for the mare’s mind if Moore rode her.

“He just felt that I needed to ride her a little bit to relieve some of the pressure. She’s so sensitive and I don’t ride as aggressive as he does. [I could] get her to chill a little bit [and say] ‘Hey, let’s just chill a little bit. All we want to do is stop the cow,’” Moore explained.

The rider and mare bred by Andrew Viola, of Fort Worth, Texas, have been figuring each other out since The Non Pro and The Open show in June.

“She’s sensitive and very observant, so it’s been hard to walk around in a circle without her getting a little tore up about something,” Moore said. “It’s not that she’s trying to be mean she’s just observant of everything.”

After a disappointing Summer Spectacular showing on some of her other horses, Moore took the reins on Purdys Rebel with a “Whatever happens, happens,” mentality.

“Usually, I get a little tore up when I show and last night I wasn’t [nervous] for some reason. I didn’t have any expectations and decided to do what I can. The cows have been pretty treacherous before and I was deep in that set,” Moore said.

With a different mindset and mostly unfamiliar mount, Moore put together a run that topped the two sets of finalists. She thanked her help: James Payne, Lloyd Cox, Matt Miller, Clay Johnson and loper Jennifer.