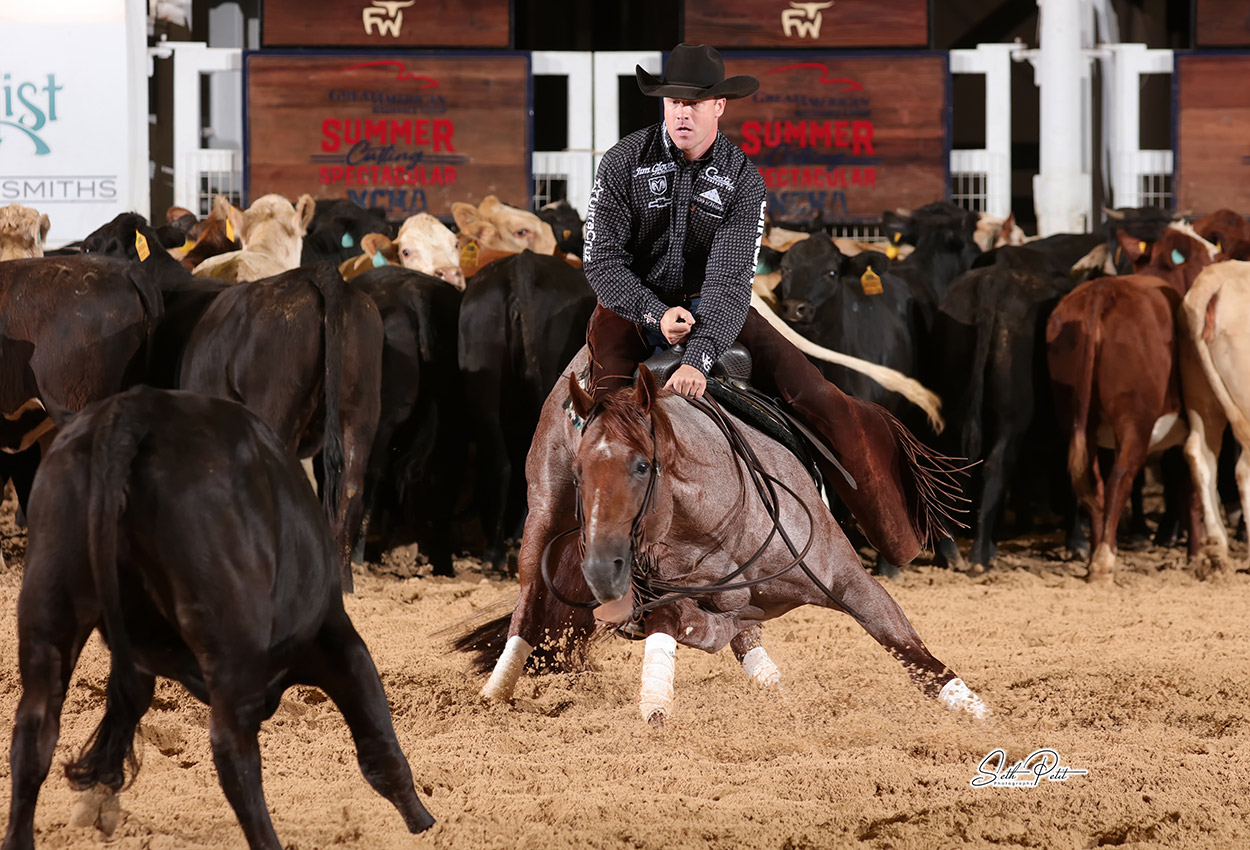 It’s hard to do better than tying for a once-in-a-lifetime win at one of the National Cutting Horse Association’s (NCHA) Triple Crown events. Unless, of course, you win one of them outright.

That’s exactly what Third Edge and Wesley Galyean did Saturday night at the NCHA Summer Spectacular, where they won the 4-Year-Old Open Championship. The win came three months after the Metallic Rebel stallion and Galyean tied with the trainer’s brother, Beau Galyean, and Reybels Cause (also sired by Metallic Rebel) for the NCHA Super Stakes 4-Year-Old Open win.

“I’m just extremely, extremely blessed and thankful just to get that opportunity at a horse like that, and to ride a horse like that,” Galyean said after he and Third Edge won the title in Fort Worth. “That’s really all I can say. He’s been special since the first day I started him on cows.”

The 226.5 marked by Galyean and Third Edge was just enough to win the title over reserve champions Wood She B Magic and Austin Shepard, who marked a 226. The win was worth $23,435 for owner-breeder SMF Cutting Horses LLC, of Aspen, Colorado.

It’s clear Third Edge is comfortable in the hallowed confines of Will Rogers Coliseum, having bagged two championships in one season. He may come by that genetically: his father, EquiStat Elite $1 Million Sire Metallic Rebel, and dam, Lil Rattler, both won championships at NCHA Triple Crown events during their own careers.

Lil Rattler, a Dual Rey mare that Galyean trained, made several finals appearances in Will Rogers Coliseum during her own show career with him in the Open and with SMF Cutting Horses LLC owner Steven Feiner in the Non-Pro.

In 2014, Lil Rattler and Feiner tied for the NCHA Super Stakes Classic/Challenge Non-Pro Championship, and then won the class title outright in 2015. She retired with $338,967 in earnings.

“His mother was really special mare,” Galyean said. “She was a big strong mare, and she kind of had a squatty look about her in front of a cow. And, I think that’s where he gets his squatty look from, but then he can move better than what she could move. I think that comes from [sire Metallic Rebel], you know, the Rebels can really move left and right really well. So, he got the best of both worlds there.”

The NCHA Summer Spectacular was Third Edge’s third major win of the year. He and Galyean previously won the 4-Year-Old Open at the Arbuckle Mountain Futurity show. They also made the 4-Year-Old Open finals at the Ike, Cattlemen’s Derby and Breeder’s Invitational.